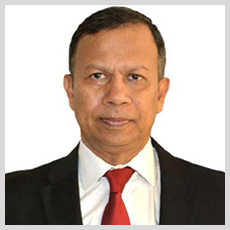 Retired from Bangladesh Army on 29 November 2020. His 39 years of career includes vast experience of working at all levels of military command and leadership. Experienced in the highest-level decision-making process for national strategic and military affairs. Worked directly as Principal Staff to the Honorable Prime Minister (Head of the Government) for all operational, administrative matters including disaster management and UN Peace Keeping of the Armed Forces. As Adjutant General of Bangladesh Army he was Vice Chairman of Army Welfare Trust where he worked as Vice Chairman of Trust Bank Ltd.

Contribution in International Arena other than UN Affairs