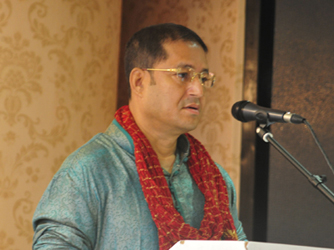 A Valiant Freedom fighter, Group Captain (Retd) Abu Zafar Chowdhury, GD(P), psc was born on 8thFebruary, 1953 at Harualchari in the district of Chattogram in a elite Muslim family. Late Alhaz Ali Ahmed Chowdhury, his father was the disciple of a famous religious Muslim clergy, who was a resident of Turkey. While studying at undergraduate level, at the age of 18 years joined the Historic War of Liberation of Bangladesh in 1971. Fought in Sector No-01, covering the area of Chattogram Hill Tracks and part of Chattogram district. After the historic and glorious victory and the liberation of Bangladesh, Abu Zafar Chowdhury, joined the newly born Bangladesh Air force on 14th December 1972 as a flight cadet. That was the first batch after liberation of Bangladesh. This is undoubtedly a part of the history of Bangladesh. The group of cadets was sent to former USSR, and was trained in the Warsaw standard Frunze Military Academy. Group Captain (Retd) Abu Zafar Chowdhury has successfully graduated from that academy. He satisfaction in basic, and advanced flying, and as well as in the academics. After completion of three years vigorous training he became an operational pilot, and diploma aeronautical engineer. Besides, passing a tough exam he also qualified himself as a Russian-English-Russian language military interpreter. After completion of the training he, along with the other flight cadets of first GD (P), came back to Bangladesh in the month of November, 1975. During his carrier in the BAF he commanded very many important operational and training units. He was deputized to Iraqi Air Force for two years as a flying instructor to train future fighter pilots. He also served in the flying academy of BAF with utmost sincerity, untiring effort, and dedication. He logged a huge safe training and operational flying hours, holding highest flying hours and instructional hours.

In 1976 till mid 1980 he fought the counter insurgency operation in Chattogram, Hill Tracks (Operation Typhoon) as a Helicopter pilot with the collaboration of Bangladesh Army. He took over The DMCB in 2002. This organization is a 100 % locally sponsored privet Co-Operative Bank. In 2002 this bank had only 7 Branches with a deposit of 60 LAC taka only. With this meager amount and with the handful of branches he took over this Bank as a chairman. With his vigorous endower, zeal and brave steps he augmented the business of this BANK in all sectors as a whole. With his hard work and highly intelligent professionalism the business of the Bank started flourishing. Within a short span of time DMCB became the eye catching icon in the cooperative sector. Currently DMCB is running business with 134 Branches with a per year roll over of TK 20,000 crore.

He is a man of success. A philanthropist who donated good amount of money to the “Differently able child organization’’ [PROYAS] in different Cantonments. He also offers financial assistance for the treatment of cancer patients living below the proverty line. He has always been dedicated himself to corporate Social Responsibility activities and for the houseless poor people of his village he built houses for this deprived communities. As he is the disciple from a Elite Muslim Family he has constructed a Gorgeous Mosque in his village where hundreds of devoted Muslim offers Five time prayers. He also created a Jakat Fund for the poor peoples of his village. He is married. His wife is a highly qualified lady and she is holding the prestigious position as a Managing Director of this Bank. He has got only one highly educated Son and blessed with a Wonderful lovely Grandson. Like many others his grandson has brought all the happiness and peace for him. As if the sun has risen on the horizon.

He always dreamed and aiming to build a poverty-free Bangaladesh through co-operative theme and also believes in fostering community spirit to make the world a better place for each individual. Considering the activities of the Valliant Freedom fighter, Group Captain (Retd) Abu Zafar Chowdhury, GD(P), psc in the field of CSR , innovative schemes, highly–quality service, excellent governance, and unique management systems, he has been honored with BIZZ AWARD-2019 by the US- based international firm –World Confederation of Business. Finally Group Captain (Retd) Abu Zafar Chowdhury, GD(P), psc quoted “This is Bangladesh and This is Micro credit” I’m doing good. DMCB doing Better and INSHSALLAL Best will follow.’’

THIS WORLD IS FOR THE BRAVES
AMIN.