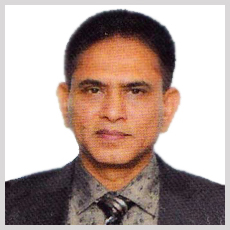 Major General AKM Abdullahil Baquee, rcds, ndu, psc (Retired) has been the advisor to The Dhaka Mercantile Cooperative Bank Limited since 02 February 2020.
Major General Baquee was born on 03 January 1964 in Chapai Nawabgonj Sub Division under Rajshahi District. He had his early schooling in Chapai Nawabgonj Model School and Horimohon High School. He passed his SSC and HSC from Rajshahi Cadet College. Under Rajshahi Board of Secondary and Higher Secondary Education, he passed in the first division securing 3rd and 5th position in the merit list respectively in SSC (1980) and HSC (1982) examination in Science group. In his school and college life he has been a good player and athlete. He was captain of the college Football team which became champion in the Inter Cadet College Sports Meet in 1982. He made a record timing in the 3000 meter Steeple Chase event in the same sports meet. He was the College Prefect of Rajshahi Cadet College in the Year 1981-82.

Major General Baquee joined Bangladesh Military Academy in the year 1982 with 10TH BMA Long Course. He was appointed as Battalion Senior Under Officer (BSUO, the highest appointment as a Gentleman Cadet) of the Cadet Battalion. He received the coveted “President’s Sword of Honor” for his best all-round performance in the academy. He also earned his B. Sc. degree from Chottogram University with a First Class (Distinction in Mathematics). He was commissioned as an Infantry officer in the year 1984.

Major General Baquee, during his service, attended Army Command and Staff Course from Defense Services Command and Staff College, Mirpur and obtained his Masters degree in Defence Studies from Bangladesh National University in 1995. He is a PhD candidate (2019-2020) in Bangladesh University of Professionals (BUP), under the Center for Higher Studies and Research. He is also an adjunct faculty in Faculty of Business Studies (Department of Business Administration), Faculty of Security and Strategic Studies (Department of Peace Conflict and Human Rights), Faculty of Arts and Social Science (Department of Development Studies) in BUP. The General is a fellow of National Defence University (2004-2005), Washington .He is also a fellow of South Korean National Defence University, Seoul (2010-2011) and Royal College of Defense Studies, London (2018-2019). He is now an academic advisor for the Course Members of National Defence College (NDC), Mirpur. He also renders service as resource person to the course members of Armed Forces War Course in NDC.

While in service, the officer had two tours of duties in the United Nations Peace Keeping Missions; one in UNIKOM at Iraq-Kuwait borders (1999-2000) and the other in UNAMIS at Khartoum (2007-2008). The officer served as Commandant of School of Infantry and Tactics (SI&T), Sylhet, and Commandant of Defence Services Command and Staff College (DSCSC), Mirpur. He also had tenure of service as Senior Directing Staff at National Defence College, Mirpur. He completed his service career in the year 2021 from NDC.

Major General Baquee was team captain of the Army Football team in 1991, and he received "Army Blue" in Football in the same year as the Army Team clinched first ever international trophy in Kathmandu, Nepal, taking part in ‘Tribhuvan Challenge Shield’. He served tenure of 2 years (2016-2018) as Vice President of Bangladesh Golf Federation and the Vice President of Kurmitola Golf Club. He was President of Bogura Golf and Country Club from 2013 to 2016. He is a kin golfer. He loves travelling. He is fluent in Bangla and English, can read Arabic and understands Indonesian Language (Bahasa Indonesia), Turkish Language (Turkche) and Korean Language (Hangul).