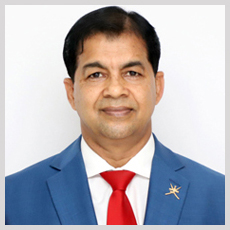 Brigadier General Shah-Noor Jilani (Retd) joined The Dhaka Mercantile Co-operative Bank limited as Advisor (Marketing and Monitoring) on 01 March 2021. Shah-Noor Jilani was born in january 1967 at Mirsharai of Chattogram district. He belongs to a SHAHEED family. At the age of 4 years he lost his Father, Mother, Two Brothers and the only sister who all were killed by the Pakistan Army during Liberation War on 06 April 1971. Had his primary and high school education at Chattogram until he joined Jhenidah Cadet College in 1979 and Passed both SSC and HSC under Jessore Board in 1983 and 1985 respectively. He was House Prefect (1984-1985) and a promiant All-rounder Cadet for Games, Sports, Cultural events and Academic Subjects as well. His record timing in 400 metres Hurdles made in 1983 remains unbroken until date. He received ‘COLLEGE BLUE’ in Basket Ball (1985) and BMA colour in 1987. He joined Bangladesh Military Academy with 16th BMA Long Course in August 1985 and was Commissioned in the Core of Infantry in 1987. He was appoineted as Battalion Junior Under Officer (BJUO) in BMA.

Shah-Noor Jilani is a retired Brigadier General who have served Bangladesh Army and United Nations over 33 years in a diverse range of administrative, instructional, management and leadership positions in different challenging and multi-cultural environments. Each of the position held demands deep involvement in strategic planning, security and risk management, effective administration, sound and efficient financial management, critical analysis and decision making along with HR development and management. In his long tour of duty, Brigadier General Jilani served as Commandant Corps of Military Police (CMP), Deputy Commandant of The East Bengal Regimental Centre (EBRC) and Pioneer Commander of 99 Composite Brigade at Padma Multi Purpose Bridge Project. He was Managing Director (MD) of the Largest Army Officers Housing Project JOLSHIRI. During his service, the officer had two tour of duties in the United Nations Peace keeping Mission; One in UNIKOM (Iraq-Kuwait, 1994-95) and another in MONUSCO (DR Congo 2010-11). Finally Brig Gen Jilani Completed his service as Deputy Director General from Director General Defence Purchase (DGDP) on 31 December 2020.

Brigadier General Jilani has been awarded with “Bishisto Sheba Padak” (BSP) for his extraordinary performance and contribution in constructing Emergency Embarkment at Padma Bridge site in 2014 as Commander 99 Composite Brigade.

Brigadier General Jilani is a kin Golfer and associated with different Golf Clubs of the Country. Presently he is EC member and Chairman Tournaments Commitee of Army Golf Club (AGC) Dhaka. He is also member of Dhaka Club and Chittagong Boat Club. He loves travelling and travelled 21 Countries so far. He is Happily married to Nusrat Hossain who is a banker and now serving as Chief Manager (SAVP) in Trust Bank Ltd, Radission Br, Dhaka. They have two sons studing in University and College.