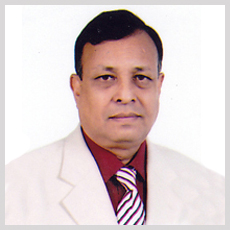 Gallantry award holder freedom fighter of the stare, Major (retd) ATM Hamidul Hossain (Tareq), Bir Bikrom, Psc was born in Bogura. Student of Bogra Zilla School, Dhaka College & a Military graduate of Quetta Staff College, Pakistan. While studying at undergraduate level, at the age of 19 years joined the Historic War of Liberation of Bangladesh in 1971. He was one of the Company Commanders of the valiant Freedom Fighters, fought under Sector No. 7. During the Final assault by the Allied Forces (Indian Army and Freedom Fighters) in Northern Sector of the than East Pakistan by 20 Mountain Division under the Command of GOC Major General Lachman Singh. His Company of Freedom Fighters was attached with 6 Guard Regiment under the Commanding Officer Lieutenant Colonel VK Datta and fought shoulder to shoulder. During the advance in the war field, he proceeded through the connecting axis of Fulbari-Churhkai-Nababganj-Pirganj-Palasbari-Gaibandha-Bogra and fought a series of front battles. In Pirganj his Company ambushed the enemy GOC’s Convoy of the 16 Infantry Division Commander Major General Nazar Hussain Shah who was retreating from Rangpur to Bogra. In recognition of his gallantry fighting, General Lachman Singh recommended him for an award and he was awarded the gallantry award Bir Bikkrom by the Government of the People’s Republic of Bangladesh for heroic win against the then Occupation Army of Pakistan.

After that, he joined as a Commissioned Officer in Bangladesh Armed Forces and retired as a Major in 1989. After the retirement he joined Padma Oil Company (formerly called Burma Eastern) as a Senior Management level and finally served as Head of Human Resources & Head of Defense Marketing up to 2008.

In the print and electronic media, he is better known as a writer, newspaper columnist and researcher on the War of Liberation of Bangladesh. By now, he written and published as many as 35 books on the War of Liberation of Bangladesh and received KOBI SAMSUR RAHMAN AWARD for the best writer of War of Liberation. One fine morning after 25 years on 2005 Group Captain (Retd) Abu Zafar Chowdhury, GD(P), psc called him over telephone as an old friend and fellow freedom fighter. Both Friend meet together and Group Captain (Retd) Abu Zafar Chowdhury, GD(P),psc with his magnanimity appoint him as a Director of DMCB. Till today they are working together.