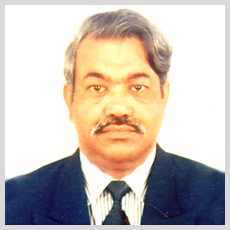 Wing Commander Mir Ali Akhtar (Retd), GD(P) was born in Kurigramdistrict, a 1971 liberation war veteran of Sector - 6. He is one of the few ofthe area who locally organized the liberation war (resistance of Pakistani Army invasion), motivated people for supporting liberation war from the beginning, later actively participated in the war of liberation. He is a science graduate (first class R.U.), and post graduate in aviation safety management (first class K. U.) After the liberation he joined the Bangladesh Air Force and was sent to former USSR for flying training. He has successfully completed the basic and advanced flying training and also diploma in aeronautical engineering (Mi-8, Frunze military aviation academy, USSR).

He has also completed the paratroopers’ course successfully in USSR. He is a counter insurgency flying veteran of Chittagong Hill Tracts and flew extensively in the region. He is a training specialist. He has on his credit the pride of planning and developing the Flight Safety Institute of BAF, a training institute of international standard, where many foreign air force pilots and engineers are trained on aviation safety management. He has earned an immense reputation as an officer commanding of FSI, BAF. And as recognition of it, and his hard work, dedication and sincerity he was awarded with the commendation of the Chief of the Air Staff, BAF. He has written a few books for the courses of the FSI, BAF; those are Communicative skills, Aviation Safety Management, Aircraft Accident Investigation Check list. He speaks 5 languages i.c. Bengali, English, Russian, Urdu, and Hindi (speak only). He was CEO and country director of a former foreign NGO, The Japan Bangladesh friendship development association.

He did a long time research work on folklore of the Dhorola-Dud kumar-Tista-Brahmaputra river basin area (BD). He has written a book on this subject. The name of the book is “Vaoaiya”. At present he is a Director and Advisor, DMCB. He is father of a married daughter; her husband is a civil engineer. He is an enlisted lyricist of Bangladesh Betar (radio) and BTV. He is honest and sincere.